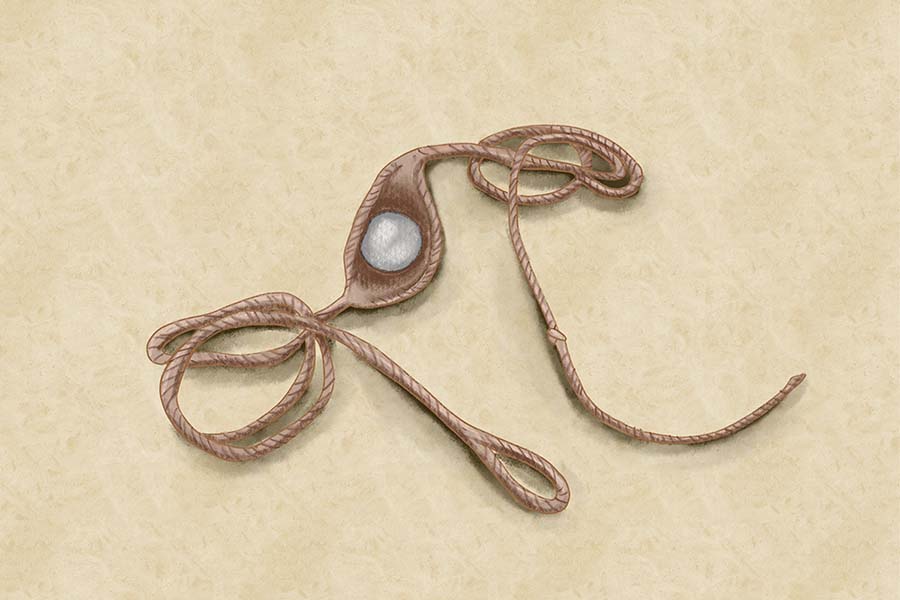 The most famous slinger in ancient history was King David, but few truly appreciate David’s prowess in the art of sling throwing. Traditional storytelling relegates the David and Goliath sling to a child’s toy. It was anything but. The sling weapon was common in ancient warfare and those who wielded it were pretty darn good.

A sling in ancient times resembled an eye patch with two cords tied to the opposite ends of a small piece of cloth or leather. This piece of cloth served as the pouch for the stone missile. The pouch could also be made by braiding material like flax, hemp, or wool together.

How was a sling employed?

A slinger would place a rock or other similar projectile in the pouch and pull the cords taught. The warrior would then spin the sling until he built enough momentum to release the missile. These missiles could travel up to 62 miles per hour (100 km per hour) and reach 1300 feet (400 meters) based on estimates.1 That would give a sling an advantage over the bow and arrow. Although making a sling and finding the missiles was rather easy, learning to use one effectively required extensive training and practice.

In warfare, slingers would often be placed alongside archers. Because they could be employed from any type of terrain, they were rather useful against the upward slopes of fortified cities. The reverse is true as well. Slings could be effectively used to defend a fortified city.

How popular where slings in ancient warfare?

Slings were used by armies worldwide from the Incas in Peru to the Greeks in the Mediterranean to ancient Chinese armies. Experts are unsure if slings were independently developed by different cultures or if their use spread from one particular source.1 Some armies used them more than others and for some people groups, slings were endemic to their culture as it was for the Balearic Islanders. Other armies like the Romans were more likely to employ mercenary experts in sling-throwing than to train their own warriors in the art.

How effective were slings in ancient warfare?

Expert sling throwers were incredibly accurate and could cause real damage when the projectile reached its target. The stone missile could cause blunt force trauma shattering bone and damaging organs, and could hit an opponent with sufficient force to kill him.

Hannibal Barca, one of the greatest commanders in military history, successfully used slingers against the Romans. In the Battle of Cannae in 216 BC, a Balearic slinger, one of the 2000 slingers employed by Hannibal, hit his mark. The Roman general Lucius Aemilius Paullus received a mortal wound from the sling missile. 2 He was one of over 55,000 Roman casualties during that battle. The Battle of Cannae was a disastrous defeat for the Romans and a testament to the effectiveness of slings in battle.

Balearic Slingers (from the Balearic Islands off the coast of Spain) were some of the most famous slingers in ancient warfare. Legend has it that Balearic mothers wouldn’t allow their children to eat until they were able to hit a piece of food with a stone.

The Balearic Slingers became very effective mercenaries employed by various armies to include the Carthaginians and later the Romans. Their versatility as a light infantry unit gave them an advantage over heavier infantry allowing armies to use the Balearic mercenaries in a variety of ways. Armies would often use sling units to make first contact and soften the enemy before employing the main army or in ambushes, where the slingers would hide in the brush and strike the enemy’s flank. The Use of Sling Weapons in the Bible

There is evidence in the Bible that slingers were frequently employed by Israel, from the time of the Judges into the divided kingdom. The Bible also references the sling in poetic language (I Samuel 25:29 and Jeremiah 10:18) which is a testament to its commonplace in the culture. These references, of course, coincide with the widespread use of the sling in ancient warfare.

The Tribe of Benjamin Were Expert Slingers

In Judges 20, during the de facto civil war between the tribe of Benjamin and all the other tribes of Israel, the record indicates that 700 Benjamites, experts sling throwers, were part of the forces drawn up for the engagement.

Among all these were 700 chosen men who were left-handed; every one could sling a stone at a hair and not miss.

At a first glance, there appears to be a sense of hyperbole in the text. However, in the context of how accurate slingers were in ancient warfare, it is not that off the mark (no pun intended!).

I think we can infer from the above text in conjunction with I Chronicles 12:1-2 that sling throwing for the Benjamites was possibly endemic to their tribal culture as it was for the Balearic slingers. In I Chronicles 12:1-2, approximately 60 years later after the above-referenced event, we learn of Benjamites who joined David’s forces. These individuals are again described as highly skillful, ambidextrous sling throwers. They are also described as archers. Since ancient slingers were often deployed with archers, training to do both would just seem prudent.

The David and Goliath Sling

Understanding how the sling was employed in ancient warfare, gives us a better context to interpret the account of David and Goliath. Goliath’s defeat becomes less “miraculous,” and David’s prowess with a sling becomes more evident. In other words, this is not a “parting the red sea” moment, but God using people’s talents (in this case David’s) to achieve His purposes.

Traditional stories often paint David as a shepherd boy, but as I have made the case in, “King David: The Rise of the Warrior King,” the traditional stories do not quite line up with the Biblical text. By the time David engaged Goliath, he already had a reputation of being a warrior and was employed as Saul’s armor-bearer. Based on various Davidic timelines, David was likely in his early twenties 3 If he had begun his training with a sling as a young boy, by the time he faced off with Goliath he would have already been deadly proficient (as the slinger who killed the Roman general Lucius Aemilius Paullus would have been).

The irony in the David and Goliath account is that David defeated Goliath with the very same weapon Saul should have been proficient in. Saul was, after all, a Benjamite. The symbolism here should not escape us. The David and Goliath sling foreshadows David’s eventual replacement of Saul by accomplishing everything Saul was unable to do.

While David was fleeing from Saul, he and his men were embarrassingly snubbed by a wealthy man named Nabal. David, in a rage and with the help of 400 of his men, prepares to destroy Nabal and his household. However, Nabal’s beautiful and incredibly wise wife Abigail manages to disarm David with carefully chosen words.

In her plea to David to spare her household, Abigail uses a reference to a sling.

If men rise up to pursue you and to seek your life, the life of my lord shall be bound in the bundle of the living in the care of the LORD your God. And the lives of your enemies he shall sling out as from the hollow of a sling.

As an expert slinger, the allusion would have appealed to David. Her use of the reference is also probably an indication of David’s fame as the great slinger who slew a Giant.

A couple of hundred years after the reign of David, sling weapons were clearly still employed during the reigns of King Jehoshaphat in Judah and King Jehoram of Israel. During the reign of the Israeli king Ahab, Moab was a tributary to Israel. However, upon the king’s death, Moab rebelled. King Jehoram in alliance with the King of Judah sought to quelch the rebellion. It is in this context that the text reads,

And they overthrew the cities, and on every good piece of land every man threw a stone until it was covered. They stopped every spring of water and felled all the good trees, till only its stones were left in Kir-hareseth, and the slingers surrounded and attacked it.

The initial attack against the Moabite forces was an ambush. The use of slings in the initial volley would have been tactically sound and from the text, they continued to use them in the pursuit of the Moabites.

The use of slings against the Moabites is the last reference in the Bible of a sling in an actual battle, but slings were certainly employed throughout ancient Israeli military history. Slings were easy to make and projectiles were easy to find. It was a common weapon undoubtedly incorporated into their military formations.

By looking at the history of sling weapons and their effectiveness in ancient warfare, it is unfortunate that it has been overshadowed by the bow and arrow. Even the traditional recounting of the most famous “sling” story, David and Goliath, obfuscates the effectiveness of such a simple, but deadly weapon. It certainly has been underrated. But in recognizing the true nature of the sling weapon, we can better understand and interpret important Biblical texts like the David and Goliath narrative.